Caper in the Castro 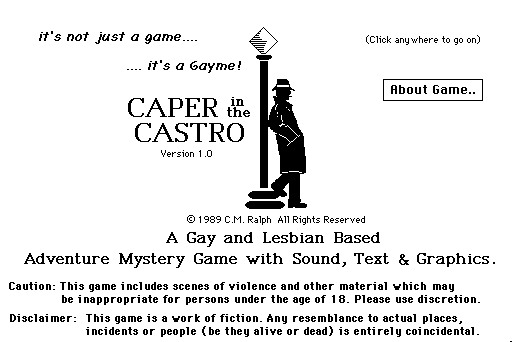 Caper in the Castro

Note: By default, the sound is off on this emulation. When the desktop boots up, click on the Apple icon in the upper left, select CONTROL PANEL, then click on SOUND and bring the volume level from 0 to 9. This will enable sound during the game.
Programmed by CM Ralph (https://cmralph.com/) in 1989, Caper in the Castro is likely the first LGBT game. It was distributed via BBS, and is 'Charityware', with the designer asking players to donate to the AIDS Charity of their choice.
You are the world famous lesbian private detective, Tracker McDyke. You are searching for a kidnapped drag queen, Tessy LaFemme. What you didn't count on was stumbling onto an even larger and more treacherous crime.
The game was changed to different locations and a heterosexual them released under the name "Murder on Main Street". This version is located here.
For more information about "Caper in the Castro":
A Q&A With The Designer of the First LGBT Computer Game, by Luke Winkie, Paste Magazine, June 9, 2014.
Caper in the Castro in the LGBTQ Video Game Archive.
--------The following is taken from the original description / info text file:--------------
About "Caper in the Castro"
This game is a Gay and Lesbian based adventure mystery featuring graphics, text, animation and sound. Written with HyperCard® Version 1.2. (Earlier versions will not be compatible) It is the first Gay and Lesbian computer game to be published in the world, as far as we know.
In the game you assume the role of a lesbian private detective,  Tracker McDyke, in search of a kidnapped drag queen, Tessy LaFemme. What you stumble onto is an even bigger and more hideous crime with a mystery  that surrounds it. (Who is Dullagan Straightman?  Who is the mysterious "L.L." that Straightman works for?  What is the meaning of the cryptograph?)
The game has a built-in  help/tutorial if you get stuck, the best advice is to try everything and anything during your adventure. You never know what might happen!  The game is packed with inside humor, puns and lots of perplexing problems.
About the Author
C.M. Ralph is a free lance artist living in the San Francisco Bay area. She supports her indulgence in art and computer game developing by working as a Quality Control Technician.
Her work as an artist has spanned some 20 years and includes such notables as the design of the AIDS Response Program logo for Southern California's Orange County chapter, along with much donated work for many other nonprofit Gay and Lesbian Organizations. This game, as she describes it is "CharityWare" follows in this tradition of works for the Gay and Lesbian community. It is given out freely, with her request that if you enjoy playing it, please make a donation to an AIDS Related charity of your choice for whatever amount you feel is appropriate.
The Inside Poop
Caper in the Castro had a creation time of 6 months, It began in HyperCard version 1.0 and then was upgraded during construction.  There was an additional 3 months of test playing in it's beta version. The final game version 1.0 was released in May of1989. Thank You's and credits appear when you click on the "About Game" button at the opening of the game. However there are some add-on's to be mentioned here:
Thanks go to Diane, the sysop of Alternatives BBS (415) 922-5489, for putting me in touch with Bill, the sysop of Fog City BBS (415) 863-9697, (Who was enthusiastic enough to carry this game, thus  allowing it nation-wide distribution.) Thank you Bill.

Reviewer: sallyrs - favoritefavoritefavoritefavoritefavorite - November 30, 2021
Subject: Caper in the Castro Review
“Caper in the Castro” was developed by C.M. Ralph over a six month period in 1989. The murder mystery game was groundbreaking at the time as it was the first computer game to focus on LGBTQ+ themes. Players take on the role of a famous lesbian private detective and are tasked with finding a kidnapped drag queen named Tessy LaFemme. Players are then given an interactive map with arrows on it that they can use to move to and explore different locations around Castro Street in search of information about her disappearance. The game features text, animation, and sound and was originally distributed for free among BBS as “charityware” to raise money for the AIDS epidemic. As such, the stack is largely intended for LGBTQ+ audiences and aimed to give back to the community. I would recommend that anyone interested in the intersection between the LGBTQ+ community and the rise of the Internet check out this stack, I also just found it really fun to play as I was invested in solving the mystery.
Reviewer: Caperer - favoritefavoritefavoritefavoritefavorite - July 10, 2019
Subject: Quick tip: You'll need hyphens
Before you open the game,

"Click the Apple logo again and open “Key Caps”. Check if you can type a hyphen (-) with your keyboard. If yes, you can skip the rest of this paragraph. If no, use your mouse to type one with the on-screen keyboard and highlight it. Press Alt+C to copy it to your clipboard. When you need to type some hyphens later, you can paste the symbol by pressing Alt+V."

Uploaded by HyperCard Online on December 20, 2017